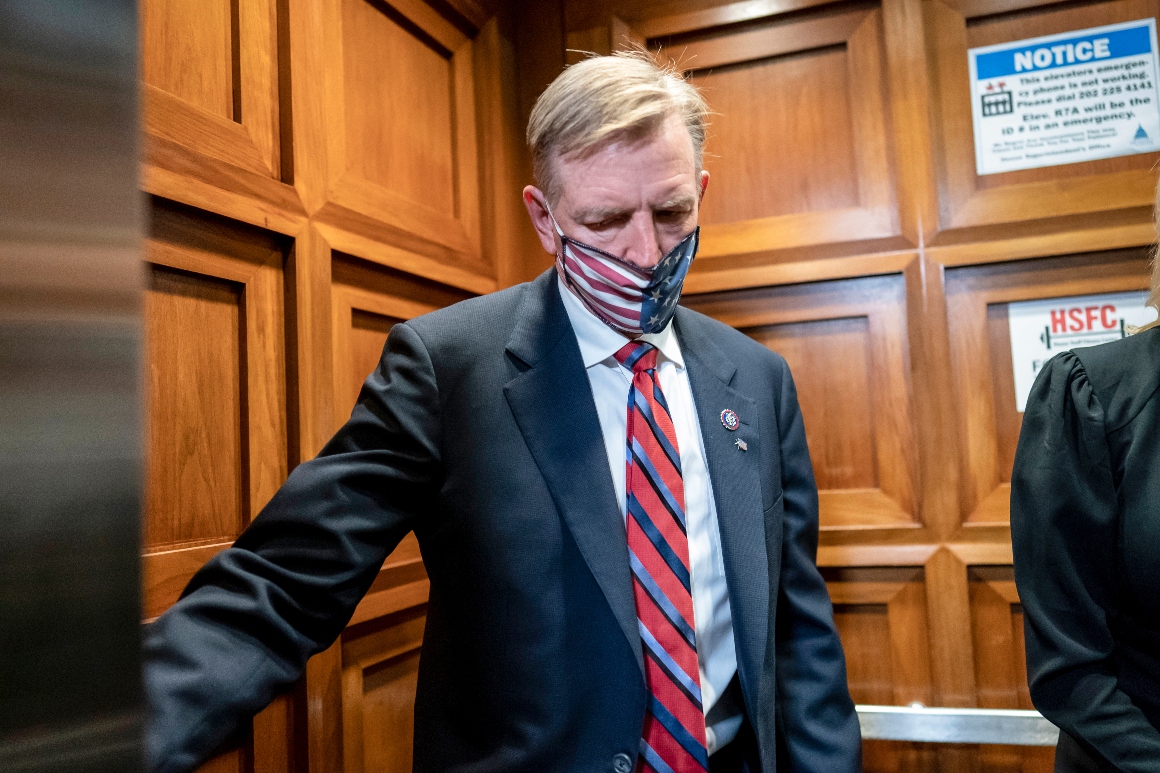 “We can not have a member joking about murdering another,” Pelosi said Wednesday on the House floor.

“This is about workplace harassment and violence against women,” she said.

While censure itself is rare, this is just the latest episode in the clash between House Democrats and Republican leaders on how best to respond to the more extreme members of the GOP — a problem that continues to resurface, particularly since the attack on the Capitol on Jan. 6.

The resolution censured Gosar and removed him from both the House Oversight and Natural Resources committees. Ocasio-Cortez is also a member of the Oversight Committee.

Most Republicans stuck together in voting against the proposal after a push from Minority Leader Kevin McCarthy and other GOP leaders to oppose the effort, decrying what they described as Democratic overreach.

McCarthy and others maintained that Gosar had already served his penance by deleting the video. Gosar also issued a statement explaining his rationale, but not apologizing, following a call from McCarthy last week.

Gosar said Wednesday on the House floor the video was “mischaracterized,” though he did not apologize to Ocasio-Cortez.

“I do not espouse violence towards anyone. I never have. It was not my purpose to make anyone upset,” he said.

As final votes rolled in, Gosar perched once again along the back wall and collected back slaps and fist bumps from GOP colleagues.

Gosar stood in the well of the House chamber following the vote for his rebuke, surrounded by his GOP colleagues, including Rep. Marjorie Taylor Greene (R-Ga.). Ocasio-Cortez sat in the front row of the Democratic side.

Greene shouted in the chamber before the chair gaveled down to restore order. The more than a dozen GOP members who were tightly packed around Gosar then quickly left the chamber.

McCarthy scorched Democrats ahead of the vote, calling the resolution an “abuse of power” by the majority.

“Rules for thee but not for me. This is part of a larger pattern,” McCarthy said. House Republican leadership had recommended a “no” vote against the resolution, calling the issue settled by Gosar’s prior explanations, which some GOP lawmakers said was sufficient.

“I always give people the benefit of the doubt. Although I certainly disagree with the cartoon or whatever it was, he said he’s sorry. He certainly explained that he understands why it’s not right,” said Rep. Jeff Van Drew (R-N.J.).

But Gosar’s posting of the video further inflamed tensions between Democrats and Republicans and exacerbated Democratic fears about rhetoric spurring more violence across the country. The Capitol Police say threats against members of Congress have spiked this year in the aftermath of the Jan. 6 attack on the Capitol.

“As leaders in this country, when we incite violence with depictions against our colleagues, that trickles down into violence in this country, and that is where we must draw the line, independent of party or belief. It is about a core recognition of human dignity and value and worth,” Ocasio-Cortez said in a floor speech ahead of the vote.

Party relations in the House have hit new lows over disputes that range from mask mandates in the chamber to Republican lawmakers trying to shrug off the Jan. 6 attack on the Capitol.

Although some of those divisions — such as the mask mandate — have mainly been used as culture war targets to rile up a political base, other strife has had further-reaching and more dangerous consequences.

The censure vote is the second time this year House Democrats have led an effort to punish a GOP member of Congress. Earlier this year, the House voted to remove Greene from her committees for her incendiary rhetoric and espousing of conspiracy theories.

Eleven Republicans had voted to strip Greene of her committees. Kinzinger was the sole GOP lawmaker to vote for both Greene and Gosar to lose their committee spots.

Some Republicans who voted for the measure punishing Greene said Democrats were going too far by removing Gosar’s committee assignments in addition to censuring him.

“If it was just censure, that’d be one thing. But tied to the committee, it just is a stretch too far. And most of my fellow compatriots are on the same page,” said Rep. Fred Upton (R-Mich.), who had voted to punish Greene. Asked whether Republican leadership should have condemned Gosar more forcefully, Upton said Democrats had effectively removed the need for further punishment.

“[Republican leaders have] never really done anything, and now they don’t have to,” Upton said.

Rep. John Katko (R-N.Y.), one of the 13 Republicans who helped clear the infrastructure bill, said he voted against it because “it’s too broad. They’re taking unnecessary shots at Republicans.” Katko denied his decision was related to the blowback he received for his infrastructure vote.

“If we take over the House next year, the same thing can happen to Democrats,” he added.

House Democrats have largely shrugged off Republican warnings that they might take similar actions against Democratic lawmakers if the GOP takes the majority. Democrats see Gosar as an extreme example.

“If Democrats do something as egregious as Mr. Gosar they ought to be censured about it,” said House Majority Leader Steny Hoyer in a brief interview. “This is not a partisan issue. This is an issue about safety. Not inciting violence and acting in a way that is consistent with what the House ought to expect. Mr. Gosar did not do that.”

Censures are a rare and unique action in the House. It was last successfully used against then-Rep. Charlie Rangel (D-N.Y.) in 2010 for misusing federal resources, filing inaccurate financial disclosure forms and failing to pay taxes on a rental property in the Dominican Republic. Only 23 members have ever been censured in the House.

Republican-led attempts to censure House Democrats over the last two years fizzled after they failed to garner enough votes in the House.

“Censure should not be frivolous. This is a 10-year gap [from] the last time we did censure. I don’t like having the responsibility of punishing members,” said Rep. Sheila Jackson Lee (D-Texas).

Sarah Ferris and Katherine Tully-McManus contributed to this report.