A cool breeze sweeps through the Dhamma Sakyamuni Monastery. Sitting cross-legged on the polished stone floor, monks meditate silently under the gaze of a Buddha painted gold. Above them, stalactites hang from the rough limestone ceiling.

This is one of the last remaining limestone cave temples in Malaysia. It sits nestled into the foot of Mount Kanthan, one of 12 limestone hills that rise up from the Kinta Valley in the Malaysian state of Perak. There are currently some 15 Buddhist monks living and practicing their faith in these caves.

But the peace here is fragile. Outside the monastery, explosions can be heard echoing through the valley like gunfire. This is the sound of the mountain — and neighboring peaks — being blasted with dynamite to extract limestone that will be used to make cement. 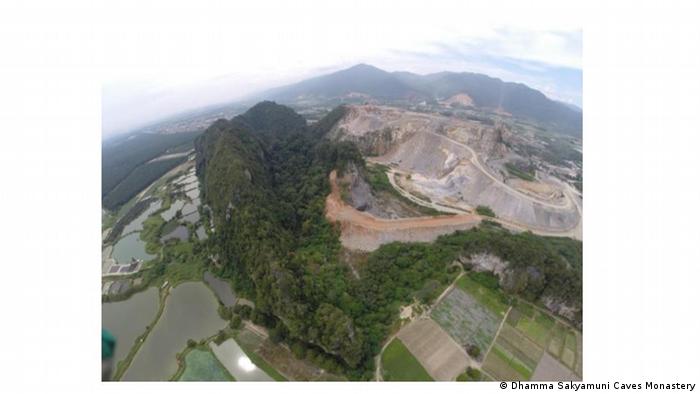 The untouched karst ecosystem is lush and green, compared to the neighboring quarried site

The Perak state government has leased Mount Kanthan to Associated Pan Malaysia Cement (APMC) for quarrying since the early 1960s. The mountain has been divided into four zones, two of which are already being quarried. The contrast is dramatic: The richly forested southerly two zones butt against the barren expanse of pale rock and rubble of the quarried zones to the north.

AMPC is in the process of applying for permits to begin work in one of the so-far untouched zones, where the monastery is situated. But first it has to evict the monks, whom it says have no legal right to be there.

Mount Kanthan is an impressive example of karst topography, where soft, porous limestone has naturally eroded to create sculptural networks of valleys, caves and sinkholes. These are home to a great diversity of specially adapted plants and animals — and have long drawn human inhabitants, too. 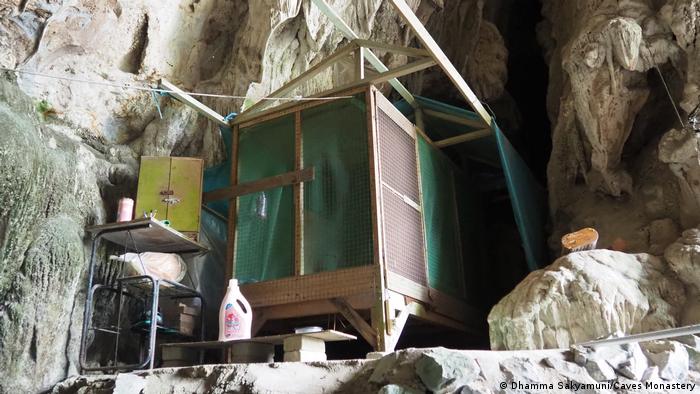 Bhante Kusala runs the monastery with the help of other monks and volunteers. He says it was founded a century ago by a Master Fu, who was drawn to Mount Kanthan because its form resembled the figure of a reclining Buddha.

“Our founder chose to mediate here because of its serene, quiet environment,” Kusala says, adding that there is an ancient tradition of Buddhist monks seeking peace in the natural world.

The monastery echoes with the gentle sound of water dripping from the stalactites that hang from the ceiling. A system of pipes catches this water so the monks can use it to bathe, wash their clothes and clean the temple’s floors.

Seongyee is a volunteer who has been helping out at the Sakyamuni Caves Monastery with cleaning and maintenance work for the last five years. “To us, this is a spiritual sanctuary,” she says. “We depend on it; this is part of the spiritual journey we are seeking.” 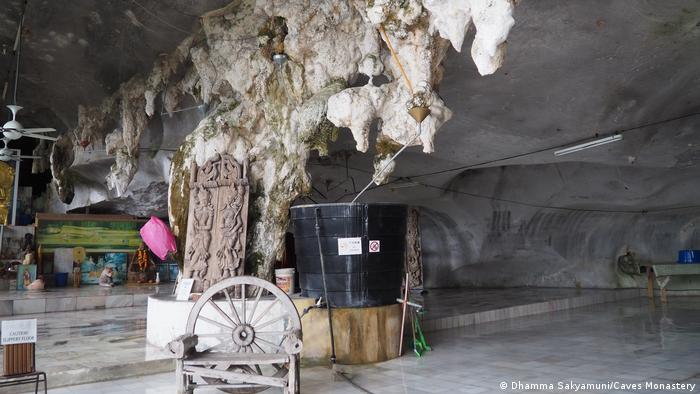 But it is not just this religious community that is at risk of losing its way of life if the cement company wins its case against them. Ruth Kiew, a botanist who works with the non-profit Malaysian Cave & Karst Conservancy, among other organizations, told DW that critically endangered fauna such as trapdoor spiders and bent-toed geckos may be driven to extinction if the entire mountain is blasted.

In 2014, Kiew published a study of the flora threatened by quarrying at Mount Kanthan, finding some 32 flora species of conservational importance, including 12 endangered species and three recently identified species of tree believed to grow only on Mount Kanthan.

APMC and its parent company, construction corporation YTL, declined to be interviewed for this story. But according to YTL’s website, the company has been working with Malaysian non-profit the Tropical Rainforest Conservation and Research Centre (TRCRC) to nurture threatened flora from Mount Kanthan at a dedicated plant nursery. 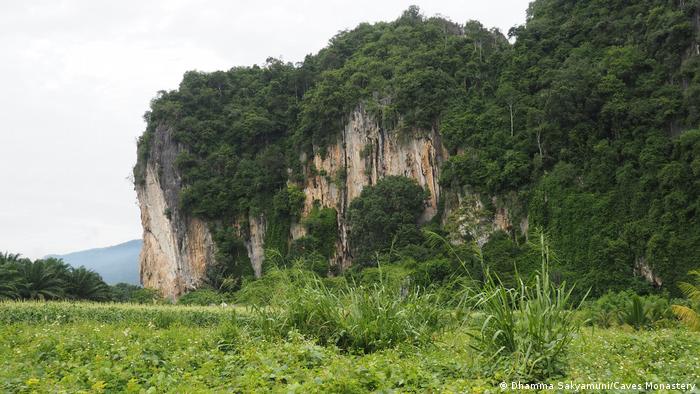 A spokesperson for TRCRC told DW the goal of the project was to train a team from YTL “on how to run their own conservation nursery, conduct seed collection, and have the basics of tree planting — all goals that were achieved.”

Whether YTL is using the know-how gained from the project to continue conservation efforts is unclear. But scientists say that destruction of even a part of the remaining Kathan Mountain habitat could see unique species lost forever.

“Even different parts of the hill, due to varied and rugged topography, still harbor unique habitats and specialist species,” Kiew said, adding that “plants, animals, and microorganisms are not uniformly distributed over the karst hills.”

Yong Kien Thai is a botanist at the University of Malaya who has visited the mountain several times to survey its biodiversity.

“They may eventually grow some of the many different species originating from the limestone, but they didn’t explain where they will replant this,” he says. “Reintroduction is also an issue because different limestone hills have their own set of diversity.” 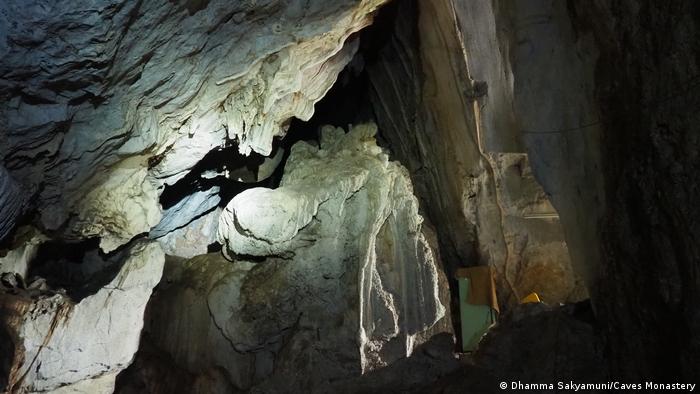 A meditation chamber within the cave system

Cultural heritage hangs in the balance

Living in harmony with these unique ecosystems, Kusala sees his community of monks and devotees as “custodians of this mountain.”

When APMC filed an order with the local court to evict Mount Kanthan’s residents in January 2021, it referred to the monks as “unidentified occupants occupying the land,” and stated they were there “without the consent, authorization and/or permission” of the company.

Leong Cheok Keng, a spokesperson for the monastery, told DW six of the monks have now successfully filed to be recognized as official parties in the case, meaning they have more of a say over how their legal argument is shaped.

At the same time, they are campaigning to have the monastery officially designated as a cultural heritage site. Before the pandemic, devotees would flock to the Sakyamuni Caves from cities like Kuala Lumpur to take part in cave meditation. 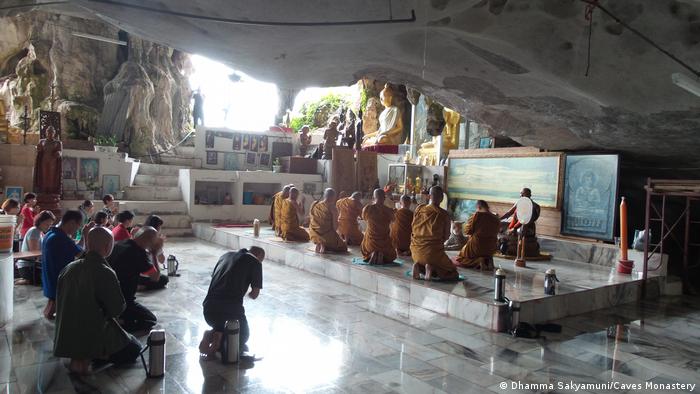 In late December 2021, the monastery received a letter of support from Ipoh City Council, the administrative capital of Perak. The council voiced its support for designating the land a cultural heritage site.

“If the monastery achieves the status of a heritage site, it means nobody can change the structures on the site and the site is protected from being interfered with,” Leong says.

Kusala radiates equanimous good humor. But he’s aware that this way of life hangs in the balance as the values his monastery represents compete with economic interests. “Nowadays, not many people want to become monks,” he laughs. “They don’t want to stay in caves or a forest… we are the real rare species!”

United Airlines: ‘No choice’ but to go green